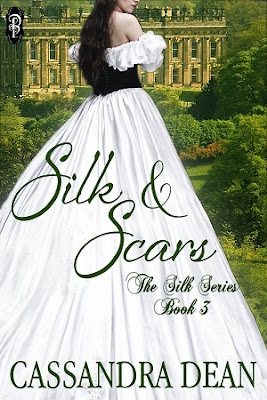 For over a year, Miss Gwendolyn Parkes and the Duke of Sowrith have corresponded. At first an error, the letters quickly became something much more, a friendship forged on like minds and perhaps the hope of something more…


When Gwen is compelled by her employer to attend the duke at his Dartmoor estate, she is devastated to find her beloved friend cold and imperious, even if he is the most handsome man she’s ever seen – despite his scars.

Edward, Duke of Sowrith, has longed to meet Gwen. Arranging her passage to his estate, he is tongue-tied when confronted with her quiet beauty. All too aware of the twisted ruin of his face, he allows fear to hold him silent…until Gwen’s safety is threatened.

Finally together, they grow closer until it seems they can never again be apart – but can a commoner and a duke find a happily ever after?

Don't worry about spoilers, this series consists of companion novels, so it's not necessary to read the other books before reading this one.

You know, I just realized that I've read a lot of books lately with a male love interest who's scarred or suffers from some kind of disfigurement, and has the need to hide part of it under a mask, eye patch or whatever... Is this now like a thing for me?

Anyway, let's just get to the story.

Because of a misunderstanding, the Duke of Sowrith gets a letter from Gwen, one that was supposed to be for her friend Etta. He reads it and actually finds it very amusing, so he writes back to her to tell her what happened. Gwen is embarrassed and apologizes for the mix-up, especially because her employer would kill her if he found out what happened, since the duke is one of his clients.

Edward, the duke, writes to Gwen again, so that she can tell him about the story with Etta that was included in the first letter... Because he's just all about the gossip.

For over a year, these two keep writing to each other and, without realizing it, start having feelings for one another. So one day, Edward orders Gwen's employer to come to his house and take her with him, where she's now supposed to work.

This is so beautiful, you guys. Beautiful!

Edward and Gwen have an amazing relationship, ever since that first letter. The way he acts in front of her once they meet in person is adorable, and I love how she's usually the one to take the first step. He's very insecure and withdrawn because of his scars, but Gwen just keeps showing him again and again how beautiful he is to her and how he doesn't need to hide from her (she actually doesn't feel good enough for him, since he's a duke and she only a commoner).

You know that feeling you get when you see (or in this case, read) something so pretty that your heart kinda hurts a little bit, but in a good way? THAT'S WHAT I WAS FEELING. I felt for Edward so much, I just wanted to give him a big hug and tell him that everything was going to be just fine.

Another amazing thing about this is that Edward respects Gwen very much and sees her as his equal. Gwen does have a job, mind you, but she gets mistreated because of her gender. Edward can't stand this and sees how incredibly smart and passionate she is about what she likes.

I was actually grinning like an idiot the whole time I was reading this. It's just so precious.

Have you read any of the other books in the series?