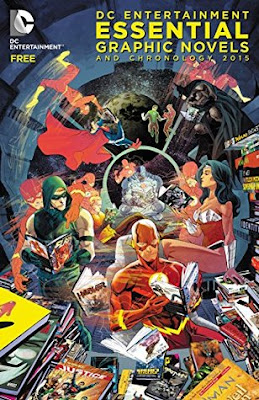 DC Entertainment has long been the home of the genre’s most seminal graphic novels, including such groundbreaking titles as WATCHMEN, BATMAN: THE DARK KNIGHT RETURNS and THE SANDMAN to present-day masterworks DAYTRIPPER and JUSTICE LEAGUE VOL. 1: ORIGIN.


This DC ENTERTAINMENT ESSENTIAL GRAPHIC NOVELS AND CHRONOLOGY 2015 catalog has been specifically built to help guide any new reader into the most accessible entry points into comics, then moving onto spotlights and reading orders for some of the world’s most recognizable characters.


DC Entertainment has revised its expansive look into our rich library for 2015, with a updated reading lists featuring graphic novels starring Batman, Superman, Wonder Woman and the Justice League, as well as the best collections from our Vertigo and MAD imprints.


When I was just a kid I really enjoyed watching all those animated series about superheroes, I especially remember loving Super Friends. And I also enjoyed the Wonder Woman TV show starring Lynda Carter. I read a few comics growing up, but it had never really been consistent; these past few years I've wanted to go back to it but didn't know where to start, so when I saw this, I knew I had to get it.

This proved to be a great guide for people who want to start reading comics, and also a great read for comic fans in general. It offers a big selection of titles, covering the very well-known ones, such as Batman, Superman and the Justice League, and it also includes other ones that people new to this might not be familiar with.

We also get a brief explanation of the New 52, introductions to big people in the graphic novel world like Neil Gaiman and Alan Moore, and a section with some comics with their respective TV / movie / video game adaptations. I've played Injustice: Gods Among Us and also a bit of the Batman: Arkham games, so I loved that this was included.

A long list of titles with a suggested reading order is also to be found in this guide, which is very helpful.

I really loved reading this and finding what to read next, it also gave me the chance to do a lot of research about stories I didn't know much about, and I found some pretty cool stuff this way.