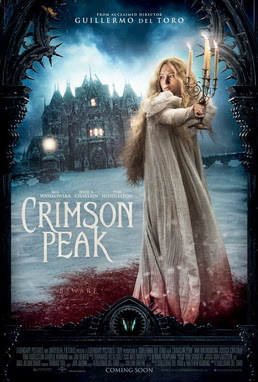 Edith (Mia Wasikowska) believes in ghosts, ever since her dead mother appeared to her one night when she was a little girl, warning her about "Crimson Peak".

Years later, Edith marries a mysterious inventor, Thomas Sharpe (Tom Hiddleston), and moves with him to his home in England, a place people like to refer to as "Crimson Peak", since the red clay to be found there turns the snow red during the winter. Soon after moving to the place, Edith starts seeing ghosts of women around the house, and begins to piece together all the clues to find out the truth about her husband and his sister, Lucille (Jessica Chastain).

Oh man, oh man! This is just the kind of story I really enjoy!

A historical mystery with gothic and supernatural elements in it, and a little touch of gore and romance. It's also said to be a horror movie, but I wouldn't really call it that, to me it wasn't scary at all.

As soon as I got home I went straight to see if there was a book, but turns out this was written to be a movie (no wonder I hadn't heard of a book!). But worry not, my friends, because a novelization of the film is coming out October 20th.

The story just kept me at the edge of my seat the whole time, making me come up with a bunch of different theories in my head about who these siblings really were! And I'll be honest with you, every time I see Tom Hiddleston my brain automatically screams "Loki!", but after this, it might think of Thomas Sharpe too. He's an incredibly good actor, he just made it so easy to believe how much in love his character was with Mia's.

Edith is also an amazing character, she's so very smart and fearless (and a writer too!). I've liked Mia Wasikowska ever since she was in Tim Burton's Alice in Wonderland, she's really great and I see she now takes part in historical fiction very often, I love that (big Keira Knightley fan here, btw). I didn't like Lucille too much, but that was the purpose of that character, we're not really supposed to trust or like her, and Jessica Chastain does that very well.

The whole film is beautiful, it is very artistic in so many ways. The house where most of the story takes place is breathtaking, and the roof has a hole right in the center, where dry leaves and white snow fall through all the time (not that the hole was put there on purpose though, the house is pretty much falling apart).

All the special effects were also incredible. The ghosts in this film may be some of the best I've seen, they were very original and creepy, emitting some kind of "smoke" that made them look so well!!

So, for now, I'll just add the novelization to my tbr list and hope to get it and pick it up sometime soon, because I do want to come back to this story and enjoy it once more!

Have you seen this movie? Are there any other similar stories you know?