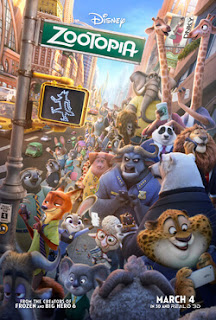 Judy Hopps wants to become the first rabbit officer in the police department of Zootopia. Once she gets there, the Chief assigns her parking duty, because he doubts she could be as good as the other animals. Finally, she finds a way to prove to him that she can be a great officer, but she's got little time on her hands. Good thing she meets Nick, a fox, who helps her get on with the case and show everyone that she's even more capable than they think.

Omg, is this a great movie about discrimination or what!

I think it's wonderful that people are using a movie that's aimed at children to address issues such as sexism, racism and all kinds of discrimination and stereotypes.

While I was watching the movie, I just couldn't stop seeing all these similarities. Basically, Prey are like women. They've been considered inferior by Predators for a very long time and, even though things have gotten better and Prey have more opportunities, they are still being put down by Predators, no matter how hard they try. They're just not good enough.

We also have the way foxes are treated, a very fine example of racism. Ever since they're little, foxes are considered treacherous and not to be trusted, just because of what they are.

At one point, there's a group of Prey who want to get back at the Predators, and let them know what it feels like to be treated in such a way. They say there's more of them, and that they can do things so much better than Predators. Extremists, basically. This just reminded me so much of those people who ditch on feminists because "they hate men"... Uhm no. Feminists just want the same opportunities for EVERYONE. Gosh, am I tired of having to explain this to ignorant people. Women who hate men are not feminists, they're just women who hate men. Period.

And if you still had any doubts left, Judy gets asked at the end of the movie if "all rabbits drive like that or if it's just her"... If I've learned something in this life, it's that every single man who says that women can't drive, is an awful, terrible driver himself.

Stereotypes are also a big thing in this movie, as you can see. And I think it took a lot of imagination to explain all of these issues using animals and humor, I loved it.

Zootopia was so much better than I expected. I really hope there's a part two.

By the way, am I the only one who can't get that Shakira song out of her head?? It's so good.

Thank you for reading! Bye-Bye! ♥
Posted by Carla @ Lipstick and Mocha at 1:27 PM