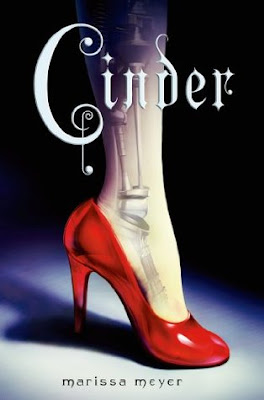 
Humans and androids crowd the raucous streets of New Beijing. A deadly plague ravages the population. From space, a ruthless lunar people watch, waiting to make their move. No one knows that Earth’s fate hinges on one girl.

Cinder, a gifted mechanic, is a cyborg. She’s a second-class citizen with a mysterious past, reviled by her stepmother and blamed for her stepsister’s illness. But when her life becomes intertwined with the handsome Prince Kai’s, she suddenly finds herself at the center of an intergalactic struggle, and a forbidden attraction. Caught between duty and freedom, loyalty and betrayal, she must uncover secrets about her past in order to protect her world’s future.

This is one of those books that have been waiting for me to read them for so very long. But I finally made it! I read Cinder. And I bet everyone's read it by now...

But whatever. I'm very excited to write about this because I really liked this book.

For those of you who haven't heard about Cinder, it's a story inspired by Cinderella (I'm guessing that part is pretty obvious if you hear the name and see the book cover, ahem) and this one's very different from other Cinderella stories, since she is now a cyborg.

About that cyborg thing... I was so very confused at first! I didn't even understand who was supposed to be human, who the cyborgs were, how they were all connected... How was it all supposed to work??... But thank God it was explained right after.

I can't believe how mean humans were to cyborgs... Dude, they're humans! They're just humans who were in an accident, lost a limb or whatever. Why did they have to get that kind of treatment and, on top of that, be sacrificed so that they could find a cure for the plague?? Ugh, stupid people.

You'd think we would've learned by now to be better. A lot of time has passed, there have been FOUR world wars and these things happen... Yes. Yes, I took it to heart.

Well now, let's talk about Cinder... She is amazing. That's it. I loved how mature and down to earth she is! She's no silly girl, all right. And this time one of her stepsisters is actually really nice, but alas, death got to her. I didn't expect that, I did think she'd survive.

The king also died. I guess we kinda saw that coming, right? If not, Kai could not become the king. Although I thought he might just stay in bed and Kai would take his place til he got better too, I don't know. Why is everyone dying?? :(

Let's think happy thoughts for now and concentrate on Kai for a moment.

How cute is he?? I feel so bad for him, having to endure all that and go through what he's going through (not that Cinder has it easy though, poor girl has a terrible life). I love his and Cinder's relationship, they're so very adorable, even if Cinder avoids him half of the time (well, I actually love that, girl is busy). He's such a gentleman and pays so much attention to the little details... I mean, he got her gloves... GLOVES!

But Cinder can't just waste time thinking about him, she's got very important stuff to do: working on the car that will get her her freedom :D. Because, let's be honest, escaping from freaking Adri is so totally worth it, sorry Kai. Priorities.

Ugggh stupid Adri. I hated her so much. I think she might be the worst version of the stepmother ever made, or at least very close to it! Why must cyborgs do all the work so that their masters can get all the money and the cyborgs don't have the right to get at least a little part of it??!! That's so frustrating!!! IT'S CINDER'S MONEY, ADRI, NOT YOURS u@i tc&^!c#br c!!!!!!!!!! Omg it just makes me so mad...

Why oh why kill cute, little Iko! The only friend Cinder had, besides Peony... who's also dead... So much death, man, so much death...

Well, in the end we know that Cinder doesn't escape and goes to the ball instead (and the car can't be used anymore, because it's freaking dead too). I must admit that I wasn't a big fan of the ball part, I don't know, it was a bit weird. I felt that nothing was really happening but then suddenly all kinds of things were going on!

Why was Kai so disgusted when finding out that Cinder was a cyborg? :'( I mean, sure, he could be all grossed out when knowing she was lunar, I get that... but cyborg? Meanie, you're just a meanie Kai, like all the others. Just go marry stupid Levana and get yourself killed or whatever. You broke Cinder's little cyborg heart.

She didn't even know she was lunar til very recently!! Well, let's be honest now. From the very beginning we do know that she's that important lunar princess who disappeared. Obviooouusslyyy. But she doesn't. She's not reading the book like we are.

I felt kinda sad that the book ended there, I was hoping to get my happy ending and get it all sorted out and for Kai to apologize to her, etc., etc. But then I saw that the second book is about Cinder too! I really thought that they were all companion novels, not an actual series, hmm... I still wanted my happy ending in this book.

And now I must know, I muuust know... Why Africa? How? Ok, during the whole book Cinder is planning to escape with her car, and now you just come, Mr Doctor (forgot the guy's name, you know who I mean), and ask of her to go meet you in Africa...

I just hope it all works out. Oh and we already met Rapunzel, I think? So I'm excited for that!! :)

Soo, have you read this book or the whole series already? What did you think of it?