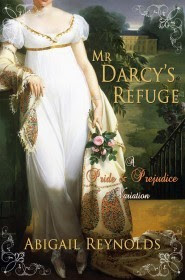 Trapped for three days by a flood, and trapped forever by society because of it….


The river isn't the only thing overflowing in Hunsford when a natural disaster forces Elizabeth Bennet and Mr. Darcy to work together. The residents of flood-stricken Hunsford, seeking refuge in the parsonage atop the hill, are unaware they are interrupting Darcy's disastrous proposal. Even worse, the flood has washed out the only bride to Rosings Park, stranding Darcy with the woman who has just refused his offer of marriage. But it may already be too late to redeem Elizabeth’s reputation….

In this Pride & Prejudice variation, the lane dividing the Hunsford parsonage from Rosings Park has been replaced by one of the flood-prone Kentish rivers. The storms are real – the spring of 1811 was remarkable for numerous thunderstorms in Southeast England.


It's been a while since I've read a Pride & Prejudice spin-off, and I had this one laying around, so I decided to give it a try.


This is a "what if" story, it follows the original book until the point where Mr. Darcy makes his disastrous and embarrassing first proposal. Elizabeth is interrupted while she's rejecting him, she thinks he got the message, but nope, he did not. He was so sure that she would agree, that he's absolutely certain she was accepting his proposal. I mean, how could she not want to marry the great Mr. Fitzwilliam Darcy of Pemberley?! *sarcasm*

Don't get me wrong. I freaking love Darcy, but the moment when he gets rejected by Elizabeth in the original book is just glorious!

So after Mr. Darcy pretty much crosses the line of propriety by hugging Elizabeth and sweetly kissing her neck (believing they were engaged), she sets the record straight and makes sure this time he understands.

But fate can be so cruel sometimes... there's a flood and none of them can leave the house. And, on top of that, they're joined by people from the village who lost their homes and have to take care of them. This and a few other things end up putting Elizabeth's reputation at risk, which is why Mr. Darcy has yet another reason to marry her.


This is not my first Abigail Reynolds Pride & Prejudice spin-off, and I have to admit she's really good at this stuff! Well, it's just the second one I read, but they were both very enjoyable.

I could not stand Mr. Bennet though... I usually really like him, he adores Lizzie and is very sweet. But OH. MY. GOD. He was so annoying here! And so out of character. I guess it had to be done so the story would work, but I didn't like him one bit. We know that, after Darcy gets over his pompous, snobbish self, he becomes an amazing man. So back off, Mr. Bennet!

The Gardiners I did love, though. They play big roles in this story and they obviously have more common sense than this obnoxious version of Mr. Bennet.

All in all, this was really good! I recommend this to you if you like the original Pride & Prejudice. But if you're a fan of Jane and Bingley, you might want to skip this one.

Have you read any other Pride & Prejudice spin-off?