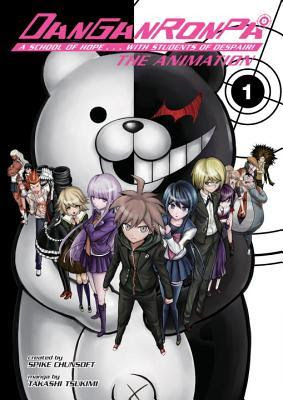 
Each year, the elite Hope's Peak Academy selects only the most gifted and talented students to enroll...plus one ordinary student, chosen by lottery. Makoto Naegi was that lucky person--or so he thought! When he shows up for class, he finds the elite students are a bizarre cast of oddballs under the ruthless authority of a robot teddy bear principal, Monokuma. The bear lays down the school rules: the only way out of Hope's Peak is to not only murder another student...but get away with it, as every murder is followed by a tribunal where the surviving students cross-examine each other!

Inspired by the Danganronpa videogame series and based on the anime of the same name, the Danganropa manga is a quirky, fun, weird, and dynamic take on the high school Battle Royale genre.


Every year an elite school selects fourteen gifted students, and an ordinary one who is chosen at random, to enroll. This lucky student is Makoto Naegi, who, after the welcome ceremony, realizes he might not be so lucky after all.

The school's principal, a robot teddy bear called Monokuma, tells the students that the only way to graduate and leave the school is to kill another student. But even more rules are made up along the way, the murderer must not only kill a student, but get away with it. In order to do this, they must face a trial, where all the other student have to prove who's guilty. If the right person is found guilty, they're killed by the principal, if not, they get to graduate and the ones being killed are the other students.

How awesome is that! Man, I really enjoyed reading this.

I found the story to be very unpredictable, I couldn't tell who the murderers were. And the ways the students are killed, especially by the principal, are very messed up and crazy. Also, at the end of each chapter, there's like a little "countdown", showing how many students are still alive and who they are.

I really liked most of the students (But omg what's with that annoying fanboy?! Creepy as hell), although some of their gifts are ridiculous, to be honest... I loved that though. The only one that's not revealed is Kirigiri's, who is a very badass girl with an incredible style, by the way. I don't know if I should find her suspicious or if I should be rooting for her, but I like her.

I also laughed while reading this. There's a student who's chosen for her strength or something like that, and I'm sure we all think she's a guy, until one day she shows up wearing a skirt and that's when you start to ask yourself if she might actually be a girl. That's what I get for not paying attention to their names in the beginning... But hey! We're not the only ones making that mistake. 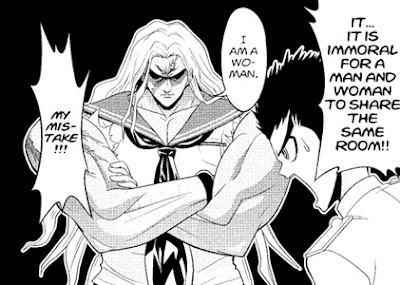 And things start to get even more interesting, since it might be possible that these students have an audience who is watching everything!

Can't wait to read the next volume :) and now I also want to play the video game so baaad!! ♥