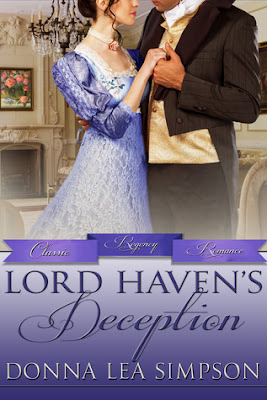 
Jane Dresden has no patience for the merciless gossip of the ton or the handy hypocrisy of the nobility, and now that her mother has arranged for her to marry the supposedly cruel Viscount Haven, she fears for her future happiness. In an effort to appease her mother and also put an end to her matchmaking, Jane agrees to meet the man, but in a fit of panic runs from the engagement and takes refuge in a country cottage, disguised as a maid. There she meets a kind and comforting local farmer who shares her taste for simplicity and quickly captures her heart.

Lord Haven had long ago resigned himself to the unpleasant duties of his title and accepted the hard truth that taking a wife and producing an heir was among them—though he shudders at the prospect of spending his life with the charmless woman his mother has arranged for him to wed. Wishing to delay their formal meeting until the last possible moment, he shrugs off his stifling attire and escapes to his favorite sanctuary, a simple cottage on his grand estate. There he meets a caring and captivating maid who steals his heart, and in the guise of a common farmer he proceeds to court her, fearing all the while that his ruse will be discovered.

As the two struggle with the implications of their deceit and the shattering knowledge that revealing their true identities will doom their blossoming bond, each is forced to choose between duty and heartfelt desire, never suspecting that their fated match holds the key to a true and lasting love.


When the story starts, we get to see Lord Haven (Gerry) and his friend Mary spending time together at her little cottage. Now, I was not too crazy about his relationship with Mary at first, it seemed like he might be interested in her, but I did love Mary, she was very sweet to Jane and helped her a lot.

And Gerry is actually surrounded by wonderful women. I mean, yes, there's his mom and one of his sisters, who are not very nice, but the other women in his life are amazing, and yet he (and his friend Mr. Varens) are sometimes too harsh on women, especially those of the ton. For example:

"Why aren't women as rational as men?"

Says the guy who likes Lord Haven's sister just because she's pretty, let's be honest now. Lord Haven's other sister is crazy about this man, yet he pays attention to the one who has only beauty to recommend her. Superficial man.

It's mentioned how most men cheat on their wives, and how barmaids are used to "relieve bodily needs", even if they're willing or not... But hey, let's just keep blaming women for everything and point out all of their flaws, even if they're not necessarily true.

Phew, now that I got that out of my chest...

Jane's and Gerry's relationship was actually very sweet! I liked how they got to know each other before finding out who they really were. And we all know we have to thank Gerry's grandma for helping them as well! His grandma was great, honestly.

I loved how both characters wanted that simple kind of life, without all the glam. And it was very enjoyable to see them lead a life away from it all for a few days. A very cute couple indeed.

Have you read this book? What did you think of it?

Thank you for reading! Bye-Bye! ♥
Posted by Carla @ Lipstick and Mocha at 1:27 PM