Soul to Keep by Rebekah Weatherspoon 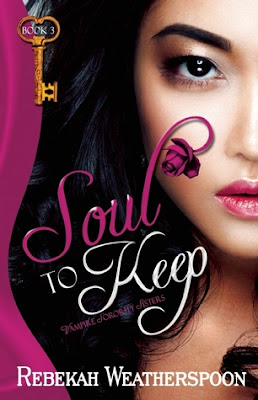 
With every commitment comes sacrifice…

College junior Jill Babineux knows where her priorities lie. Between a full course load, her blood pledge to feed a certain vampire, and all the community service hours she’s got to log with her sisters in Alpha Beta Omega Sorority, the last thing on her mind is finding love, especially with an immortal.

Which works out just fine for Miyoko “Tokyo” Hayashi who’s been so busy enjoying her wild days and even kinkier nights, she’s never had a reason to speak to the tiny know-it-all. But after a random run-in and a few carefully plotted encounters, Miyoko learns that there’s more to the sorority’s least favorite member.

Miyoko never thought she’d actually start to like the girl, let alone love her, but when true evil comes for Jill, Miyoko finds herself willing to do anything to protect her. Anything.

Let me just start by saying that I hadn't read the first two books in the series before this one, so I didn't know what to expect, but I never really got lost or felt like there was some information missing, so it was fine reading it as a stand-alone.

Now to the review...

I actually found the whole vampire feeding thing really interesting, basically there are frats and sororities, and the people who belong to them have to feed the vampires of the house, who are in charge of the place. But each person can only feed the vampire they're bound to, if they're bitten by another one, they die.

It was also very fun to see them try to solve a mysterious case about feeders being murdered, and demons possessing them. And vampires have really cool superpowers, like being able to wipe people's memories or even shape shifting.

But something I didn't like that much was that most people's lives seemed to revolve around sex. They were all "let's just Netflix and chill" all the time with everybody, even if they were already in a relationship. There's actually a lot of talk about sex, although it's usually just that (and not very relevant, really), since most stuff happens behind closed doors.

Tokyo's and Jill's relationship was sweet, but at some point I actually realized that I never liked Jill very much. Tokyo was cooler though, and her past is very interesting. This was a big change for me, since I usually like laid-back and serious characters like Jill, and can't stand crazy ones like Tokyo, so that was very nice. But I don't know, with all the feedings and the whole "let's just have  sex with everyone" thing, I felt like there was something missing between the two.


Have you read this series or anything similar?

Thank you for reading! Bye-Bye! ♥
Posted by Carla @ Lipstick and Mocha at 3:25 AM