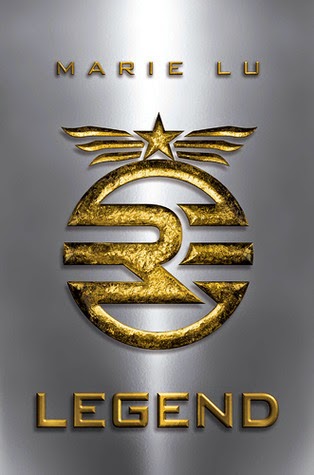 
What was once the western United States is now home to the Republic, a nation perpetually at war with its neighbors. Born into an elite family in one of the Republic's wealthiest districts, fifteen-year-old June is a prodigy being groomed for success in the Republic's highest military circles. Born into the slums, fifteen-year-old Day is the country's most wanted criminal. But his motives may not be as malicious as they seem.

From very different worlds, June and Day have no reason to cross paths - until the day June's brother, Metias, is murdered and Day becomes the prime suspect. Caught in the ultimate game of cat and mouse, Day is in a race for his family's survival, while June seeks to avenge Metias's death. But in a shocking turn of events, the two uncover the truth of what has really brought them together, and the sinister lengths their country will go to keep its secrets.

Well, another nice dystopian novel :) I've seen a lot of people talking about this series and it really caught my attention, especially since I really enjoy this genre and (like you may already know) strong female leads. So let's just start with that.

June is a prodigy that everyone has their eye on. In the Republic, when children turn 10 years old, they have to take a test that will determine their future. Of course, June passes with flying colors and actually gets a perfect score, something that has never happened before.

Can I say how much this reminded me of Pokémon? I mean, how do you expect little children to go on with their lives after a test of this magnitude that decides everything for them!! It's way too soon, they're babies!... In Pokémon, I never understood how parents could let their 10-year-olds leave home and explore a world with dangerous creatures roaming the place... on their own!!

All right, maybe it's not exactly the same, but to me it felt like that. If I had to choose, I'd make them take the test when they're like 18 or something, to me that's more realistic... not that a dystopian world where children are forced to take a test and put to work according to their results (or that's what they tell us) is something I'd want to happen, but you get the point.

All right! So... We already know that Metias is going to die, we know it. We know it's what makes the story happen and what brings June and Day together... but how are we supposed to just wait for it and feel nothing?! D:

I really liked Metias. He was an incredibly sweet brother and, after losing their parents, you don't want poor June to go through more stuff like that. She's a nice girl... I came to like her a lot, I must say, I just loved how much attention she paid to little details! It was amazing... But yeah, I felt really sorry for her.

So she later goes on a mission to find Day, since he's the only suspect they've found, but really, how lucky was she to find him just like that! That was way too much luck... For a moment I felt like things were happening too quickly, she's suddenly pretending to be from the streets, she finds Day, they kiss (just like that, it just happened) and BAM! They're at his house and his mom is dead... which brings me to Thomas... Oh my God, what a big jerk!!! How can someone who obviously has ice cold water flowing through his veins have a crush on a girl... how does that happen?? Oh, oh! And that girl is of course the sister of someone he used to call friend but then killed... He's a total keeper!

I was also surprised to see how Metias left all that information for June... I think the worst place to leave something so important for someone to find would be the Internet. So why, Metias? Why? Why a blog? I don't know how no-one found that before June... or how she found it at all!! The clues were way too difficult, how could Metias just die and be all "Yeah, I'm cool, I'm cool. My sister's gonna solve that." Noo, Metias! Too risky, I say! Everything about it was just too risky...

Finally the truth is out, June knows about the Republic's plans and wants to save Day... which she does! But his poor older brother dies... I was really, really hoping they would all survive. His brother was so very nice! Why do bad things happen to good people? :'(


Well, even though the story is really nice, I didn't love this book. But I would definitely recommend it, especially if you liked The Hunger Games or Divergent. It's just that it didn't suck me in and that's what I usually expect when I read a book.


Have you read this book? Any other dystopian novels you'd recommend?