The Duchess War by Courtney Milan 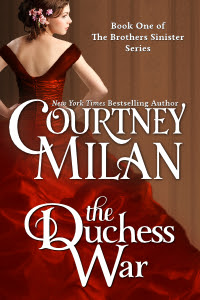 Sometimes love is an accident.


This time, it’s a strategy.

Miss Minerva Lane is a quiet, bespectacled wallflower, and she wants to keep it that way. After all, the last time she was the center of attention, it ended badly--so badly that she changed her name to escape her scandalous past. Wallflowers may not be the prettiest of blooms, but at least they don't get trampled. So when a handsome duke comes to town, the last thing she wants is his attention.

But that is precisely what she gets.

Because Robert Blaisdell, the Duke of Clermont, is not fooled. When Minnie figures out what he's up to, he realizes there is more to than her spectacles and her quiet ways. And he's determined to lay her every secret bare before she can discover his. But this time, one shy miss may prove to be more than his match...

Robert's dad was a cruel man. A rapist.

"She wanted it. They always do."

Robert doesn't want to be like his father, so he tries his very best to be a good man. Although I think it comes naturally to him, he's actually a really nice guy, and can't help but do the right thing. Every. Single. Time. He's also trying to fix some of the things his dad did.

His dad also had a bastard son, Oliver, who is now Robert's best friend. It's not a "Jon Snow" case at all though, Oliver has his own family, people who love him and are always there for him, something Robert's never had. And that's why he really longs to marry and have a family, it's pretty cute actually. Poor guy just wants to be loved.

Minnie has a past she wants nobody to know about, but someone is threatening her and trying to find out everything about who she was.

Both Minnie and Robert have much to lose, so they come to an agreement... Well, sort of. And they start working together to hide their own secrets.

Something I really loved about this book was that there were no heart-wrenching misunderstandings, even with all the secrets that were going on. Everything just passes smoothly and I was just very grateful for that, I like to enjoy my novels, not want to pull my heart out every five minutes from the anxiety. Although there is some betrayal in this, but it was understandable and they work it all out.

And, since his father was so cruel to women, Robert tries to keeps his distance from them. And seriously, who wouldn't want a guy who hasn't been to brothels, kept mistresses and all that? Robert being "inexperienced" is actually an important part of the story, and makes interactions between him and Minnie very funny.

We also get to see a lot of their married life, which I really appreciated. That's not very common in historical romances, it's just usually: He proposed. She said yes. They lived happily every after. The end.

And Minnie is so fucking smart! There were things she figured out that I don't know how she even came to those conclusions! And there's the mystery of her past, it's a while until we actually find out about the whole secret, and it made me feel really bad for her, she's been through a lot. Which is why it's very understandable that she wants to keep her distance from the duke. She's very scared to be his wife, since that also means that she'd have to be a duchess, and she's terrified of crowds.

I really liked Robert's mom as well. She sounded cold and cruel at first, but I think we have to see things from her perspective, I also felt bad for her. And she also quotes Pride & Prejudice, I did love that!

"I have read Pride & Prejudice. I know precisely what role you're casting me in - the officious Lady Catherine, foolish meddler, who believes that Darcy must marry her miserable daughter." Her lips pinched. "Maybe that is my place. I should sit here and shriek at you, 'Are the shades of Clermont House to be this polluted?'"

Robert and Minnie are very sweet together, even if she doesn't really care about him as much as he does at first, but she grows fond of him very soon. And it felt like something very real, not just a perfect love story without flaws. Although he is very crazy about her.

One of the things I enjoyed the most while reading this was the train ride, where Minnie meets Sebastian and Violet, and they just embarrass Robert non-stop talking about their childhood together. I would not have minded if there had been more Sebastian and Violet moments, that part was great. And Oliver and Sebastian also throw Robert some kind of bachelor party before his wedding, which was hilarious and so unconventional. Loved it.

Oh and that Stevens guy... I just wanted to punch him in the face. What an annoying hypocrite.

This is also very fast paced, and thank God for that! I just hate books where the story is too slow. And it includes a cute epilogue and an excerpt of Lydia's novel in the series (she's Minnie's best friend), which I actually liked, her past intrigues me, maybe I'll consider reading her book.


Have you read this or any other book written by this author?