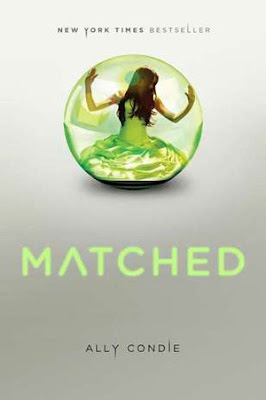 In the Society, officials decide. Who you love. Where you work. When you die.

Cassia has always trusted their choices. It’s hardly any price to pay for a long life, the perfect job, the ideal mate. So when her best friend appears on the Matching screen, Cassia knows with complete certainty that he is the one…until she sees another face flash for an instant before the screen fades to black. Now Cassia is faced with impossible choices: between Xander and Ky, between the only life she’s known and a path no one else has ever dared follow—between perfection and passion.

Matched is a story for right now and storytelling with the resonance of a classic.

It's been a long time since I've read a dystopian novel! This one was actually pretty enjoyable.

Politics usually play a huge part in this kind of books, and the government was very interesting in this story. It wasn't incredibly scary like the one we see in, for example, The Hunger Games, but they do things more secretly, they make people believe that they're happy while controlling their lives, which is very smart. Unhappy people lead to rebellions, and I didn't see these citizens starting up a riot any time soon. If something happens, the Society can always make them forget.

And it is terrifying that they know every little thing about you, no privacy whatsoever, and they also have their predictions of what you're going to do / how you are going to react to things, so no secrets there either, they know what you plan on doing before you even know yourself.

All of this has its advantages though. People can now live longer and are better citizens, mostly because of to the Matching System, which produces physically and emotionally healthy offspring. Also, murderers are not common and diseases like cancer are almost gone.

But there are way more negative things, of course. People have to eat what they're given, because they just eat for health and performance, not for taste.

Although it is pretty cool that they get their food sent over when it's time to eat! I wish I had my food delivered all the time, but I'd like to choose what I eat, obviously.

There's also a curfew. They only have the "hundred best of everything" now, because, apparently, their culture was too cluttered, so they picked a hundred poems, a hundred songs, a hundred paintings, etc. and got rid of all the others. Basic technology is all they have, and their information intake is much more specific, meaning that you just learn what you must know for your job, everything else is useless for you.

People are also told what job to have, according to their abilities. Cassia's job was kind of interesting, I had a little bit of trouble understanding what it was at first though. Oh and they can't go to other people's houses to visit, what kind of shitty rule is that!

But seriously, these people know and control EVERYTHING.

They're evil geniuses, and I wonder who's behind it all, or if the Society just represents the whole system in general.

This is a socialist government, and it just makes me wonder even more how people would want something remotely similar to this. You can't have pretty things, because that means that others would want them too, so no one gets anything. You can work your butt off, but you'll live just like the guy whose job is so much easier than yours... Ugh.

Also, everyone dies when the turn eighty (if they haven't died already), and we all know what that means: they are killed. Shame on you, Society, shame on you!

The romance part of this book was all right, the Society was a little bit more interesting to me. And I liked that Cassia trusted the system, it made her finding out the truth about them more enjoyable, I think.

So, first we have Xander, and I actually liked this guy! Cassia was very lucky to be matched to him, she knew she was getting a nice partner, but it was also too safe, she didn't get a chance to see if she could be happier with someone other than her best friend... Well, like she had a choice!

Then we also have Ky, and he was a very nice guy, too. His story was incredibly sad, he didn't really do anything wrong, but had to pay for other people's mistakes... Well, at least that's what I think, we don't find out much about it. And seriously, how did Cassia understand his drawings so well?? He must be an amazing artist for her to see all she did in just one single drawing.

I didn't want any of the guys to get hurt, but we know that she's somehow going to ditch Xander when the story starts, because that's the whole point of this. And that made me feel awful! I felt really bad for him, he's a good person.

Now I'm very interested to see the Outer Provinces, where Kyle is from. I don't know what to expect, but I hope things work out for them, and I really want to know how they're going to stop the Society (because they're doing it, right?), that seems a very tough thing to do.

Have you read this series? What did you think of it?

Thank you for reading! Bye-Bye! ♥
Posted by Carla @ Lipstick and Mocha at 1:05 PM