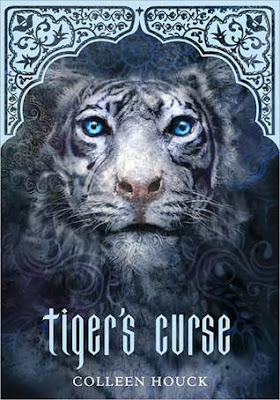 Would you risk it all to change your destiny? The last thing Kelsey Hayes thought she'd be doing this summer was trying to break a 300-year-old Indian curse. With a mysterious white tiger named Ren. Halfway around the world. But that's exactly what happened. Face-to-face with dark forces, spellbinding magic, and mystical worlds where nothing is what it seems, Kelsey risks everything to piece together an ancient prophecy that could break the curse forever.

Ok, this book made me want to have my own tiger to hang out with, for real. Sadly, I think it would be really hard to find one that would behave like Ren and won't scare the shit out of me.

So, Ren... I felt so bad for him, he's been captive and in his tiger form for such a long, long time! He's over 300 years old (born in 1657) and most of that time he's been going from circus to circus, from cage to cage... The poor fellow. I also felt a bit bad for his brother Kishan (at least he had more freedom though), but it was obvious that he felt guilty and may have been punishing himself for the whole Yesubai thing. And it really surprised me how easily he trusted Kelsey, the beginning of their relationship felt a little bit rushed, but I definitely liked him, especially because he turned out to be such a nice guy! I don't know why I thought he might be more of the bad boy type before we meet him.

There were a few things in this book that made me a little bit confused though. For example, it was very difficult for me to understand how it all worked out between Ren and Mr Kadam all those years, especially if he couldn't change into a man for so long. And sometimes, when things were explained, I didn't really understand, like the solutions to some of the tests Kelsey and Ren had to go through to free him from his curse. Kelsey is obviously the chosen one, because I would not have figured out half of those things. The one with the half-monkey dude? Not a chance.

This is very fast paced, which I'm very thankful for. It is also very original and fresh, I'd never seen a YA about tigers before. And it's packed with lots of action and had a very entertaining, interesting plot. The romance between Kelsey and Ren was very sweet, like they were middle grade students who just got their first crush (which they kind of did). It's very cute.

I also really liked Kelsey at first. But, for like the last third of the book, she was being very stupid. All right girl, I get where you're coming from, but really? I think that if a guy wants to cheat on you, all he really needs is actually wanting to cheat on you. If he's handsome or rich doesn't matter, it might make things easier for him, but a guy doesn't need that to cheat on his girl. So stop it, Kelsey. Ren doesn't deserve that kind of treatment. I actually thought she was a smart girl, but this made me consider changing my opinion of her.

I'm definitely very curious to see what happens next in this series :)


Have you read this book? What did you think of it?

Thank you for reading! Bye-Bye! ♥
Posted by Carla @ Lipstick and Mocha at 9:49 PM