Boys, Bears, and a Serious Pair of Hiking Boots by Abby McDonald 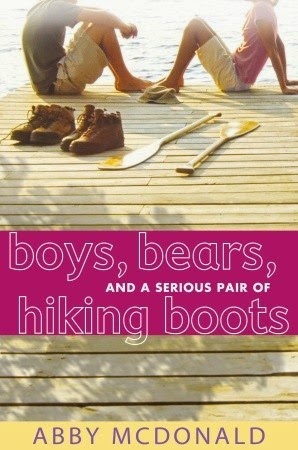 Title: Boys, Bears, and a Serious Pair of Hiking Boots


Jenna may hail from the ’burbs of New Jersey, but Green Teen activism is her life. So when her mom suggests they spend the summer at Grandma’s Florida condo, Jenna pleads instead to visit her hippie godmother, Susie, up in rural Canada. Jenna is psyched at the chance to commune with this nature she’s heard about — and the cute, plaidwearing boys she’s certain must roam there. But after a few run-ins with local wildlife (from a larger-than-life moose to Susie’s sullen Goth stepdaughter to a hot but hostile boy named Reeve), Jenna gets the idea that her long-held ideals, like vegetarianism and conservation, don’t play so well with this population of real outdoorsmen. A dusty survival guide offers Jenna amusing tips on navigating the wilderness — but can she learn to navigate the turns of her heart?

From time to time I need a book like this, one that's really cute, entertaining and that can be read in just a couple of days. It's a nice break from the heavy fantasy series.

In this book we get to know Jenna, a sweet, quirky, eco-friendly teenager. Her parents are going to spend the summer in two different places (which makes Jenna think about a possible divorce, something she's been dreading for a while). She's going to spend those months with her mom at her grandma's, until Olivia, Jenna's best friend, suggests that she go to British Columbia, Canada, to visit her cool godmother Susie.

I'll start by saying that I really liked Jenna, I also loved her ideals and how much of a hard worker she was, especially when it came to things she believed in... and then there's Fiona... well, I guess pretty much everyone who read this book really wanted to punch her in the face in the beginning, because SERIOUSLY, how can one person just be so very immature, ungrateful and annoying?!

And then we have the Stillwater Boys. Or, how I like to call them, the Mean Boys.

Well, let's just be fair. Ethan was usually nice, Reeve kinda was in the beginning, until Jenna brought up global warming and the Green Teen stuff. And Grady's just an idiot... I actually hoped Jenna would end up with Ethan even though we knooow she's gonna end up with Reeve. But hey! McDonald made it easy for me, Ethan's gay.

Later we get to know a little bit more about them, for example, we know that Reeve's the bastard that was driving the truck when Jenna just got to the place and was a little bit lost... he saw her and just kept driving. Ain't he a Prince Charming?

But really, these boys are way too mean to her, she's from the city! I bet there's other stuff she knows that they must suck at! At least she spends a lot of time with Ethan and he's very sweet, and he also said something wonderful that most people in this world have a lot of difficulty trying to understand: "So I like guys? Big deal. It's not the sum total of my entire identity."

And also, what does he mean fish are not animals? I was very curious there.

Well, after that, Jenna spends more time with Reeve, realizes she has a thing for him *sarcastic yay!* and almost gets attacked by a bear. I love how then she's just like "The hell with everything! I'm gonna live my life!" and that's when they kiss... I was very surprised when an actual bear appeared, I mean, when I read the title of the book I thought she was gonna encounter a bear all right, but after she starts reading that survival book, uses it to understand Fiona's behavior and says she's like a bear, I thought that she was that bear the title refers to haha. I guess not.

Oh and Fiona!! She changed so much! I ended up adoring her! And I can't believe I haven't said this already, but how great is Susie! She's adorable :3. I really like the part when they all start hanging out together, like when they go to the spa in Blue Ridge... aaand we find out that Jeremiah Coombes (the one who wrote the survival book) is the owner of the place. I thought it was really sad when he said that "one person doesn't really make a difference", that's just depressing man, don't say that. But I did get some of the other things he said, and Jenna did too. She starts to think about all the protests and things she's done, and tries to see their impact.


And, of course, that's when Olivia appears in Canada and thinks it's completely right to stay at Susie's house without being invited or letting them know she was coming... what happened to her?! She changed so much, she was being a pain and I hated her sooo. What's with all that talk against corporations, the government, capitalism and fascist leaders?! I was getting really sick of her.

I think that the first time I lost it because of her, was when she threw away Jenna's sunscreen, to me that would mean war, no one touches the sunscreen, NO ONE. And why is it so difficult for her to keep secrets? She acts like she's better than everyone else around her when, in reality, she's the worst, and by far! I mean, she calls a protection agency... during the opening party... to "accuse" her nice hosts... WHAT?! Wow...

And while that happens, Reeve is being a big ass... again. I was all "Just go with pretty little Kate, Reeve. Just go". It's nice to know Jenna doesn't actually end up with him, really. It's like he had two different personalities.

So back to Olivia... SHE LETS THE OTHERS KNOW ETHAN'S GAY!!! I couldn't believe how cruel she was... And then see? See?! Grady's the biggest jerk ever, he called him freak. Not cool. At all.

But oh well, at least everything works out just fine in the end, they all keep being friends and are nice to each other (except Olivia, yay).

I thought this book was really cute, I liked the story, it was very original. And I think that what I loved the most about it were the changes Fiona and Olivia went through... because that does happen in real life, and we can't help it. It was really well done.

So have you read this? Any similar book you might suggest?