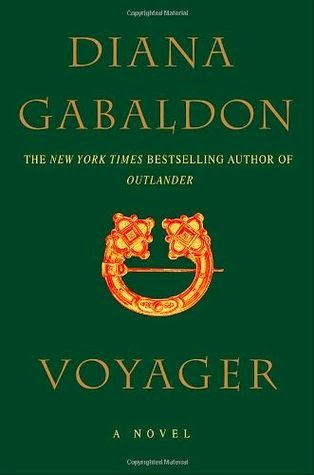 
From the author of the breathtaking bestsellers Outlander and Dragonfly in Amber, the extraordinary saga continues.

Their passionate encounter happened long ago by whatever measurement Claire Randall took. Two decades before, she had traveled back in time and into the arms of a gallant eighteenth-century Scot named Jamie Fraser. Then she returned to her own century to bear his child, believing him dead in the tragic battle of Culloden. Yet his memory has never lessened its hold on her... and her body still cries out for him in her dreams.

Then Claire discovers that Jamie survived. Torn between returning to him and staying with their daughter in her own era, Claire must choose her destiny. And as time and space come full circle, she must find the courage to face the passion and pain awaiting her...the deadly intrigues raging in a divided Scotland... and the daring voyage into the dark unknown that can reunite or forever doom her timeless love...


My reviews from the previous books in the series:

“But James Fraser was unfortunately not dead, after all”

Oh God, Oh God… remember how I said that Diana Gabaldon hated me? Well, while reading this I was pretty certain that she wanted me dead! Oh my GOD!!

I must admit that this book was incredibly difficult to read… Or at least the first half. I still don’t like the fact that Jaime and Claire have been apart for 20 years… I have not lived much longer than that!! That didn’t have to happen, Diana. It didn’t :’(

First let me just tell you a story, a really sad story:
One day there was this girl who had just finished reading "Dragonfly in Amber". The girl was really sad and wanted to start reading the next book in the series to find out what would happen and to know if she could be happy again. Before this, she went on Goodreads to find some spoiler-free reviews to read. She found some really good ones that encouraged her to read this next book, but then, she came across a review that didn’t say anything about containing spoilers, so she innocently started reading… She was seriously spoiled after just the third line. The End.

Damn yoooouu mean random reviewer on Goodreads!!! They told me like the whole book, the whole thing! It was like they did it on purpose, putting all the important things that happen in just one freaking line. Who does that??

Well, now that you know this really sad fact, I’ll keep telling you what I thought of this book.

I felt really sad for Jaime at first. He had this really awful life, living in a cave and then in prison, then as a servant… But why oh why did he have to be with those other women and marry stupid Laoghaire? :’( Don’t you see what you’re doing to our little hearts, Jamie? Don’t you see? I mean, I know, I knooow he thinks he won’t see Claire ever again… But still :’( we know Claire’s coming back, so it just hurts. Too much.

So we know he was with Mary Mcnab (ugh Jenny, I blame you). Then Geneva, but ok, all right, I guess we can’t blame him for that since he was blackmailed and he didn’t want to have anything to do with that spoiled brat, but now you have another child besides Bree, Jamie, and that makes our hearts hurt even more!! What will Claire say, huh??

And that little son of his was annoying too, I never really liked him.

Oh and then there’s the oh so precious way we find out that he’s married to Laoghaire (well, I would have, if I hadn’t been spoiled by mean random reviewer). I was so happy when Claire left after this, I think she always lets him get away too easily, no matter what he does, but this time she left!! Hurray!!... And then she came back… And it was like nothing ever happened. Ok. I need some begging from Jaime, man. Already said it in my review from the previous book, it needs to happen.

And now let’s talk about sweet little Frank. Oh my, Frank… I didn’t mind him in the first book, but I actually hated him in this one. I think he should’ve left Claire when she told him to. Why stay with her "for the child" if you’re just going to have 973 mistresses, man? He just wanted to be a father and took advantage of the situation; I don’t find him to be an "honorable man" like Claire says, I’m sorry, I don’t like the guy… At least he was nice to Bree... AND we now know for sure that he did cheat on Claire when she went to the war, and that was before Jaime, so there wasn’t supposed to be any resentment. Nice, Frank. Really nice. Aren’t you a gem!

I mean, he cheated on her, then she traveled to the past and was there for 3 years, during that time he also cheated on her (wasn’t he worried about his missing wife? Oh my God), then she comes back and he cheats some more… Wait, why did he want to get married? He’s clearly not marriage material. And poor Claire was worried about having to cheat on him with Jaime… And she actually kept the wedding ring!!! ALL. THE. TIME.

I think I would’ve felt better with this whole thing if Claire had hooked up with some other man. No, really. It would’ve made things more even, you know. Why didn’t she hook up with Joe? I liked Joe, but I don’t know if he had a wife at that time though. He liked Claire more than Frank, that's for sure. Oh and Frank’s also a racist!!! D: Shame on you.

Talking about Joe… those bones they had in the hospital, the ones they said that didn’t belong to a slave… were they Claire’s? Or from someone she knew? :O I feel that may be important, I don’t know.

Well, now that I let the worst part out of my chest, I guess I can talk about the rest of the book… So… what was with that reunion???? I had been waiting for so long! Since A Dragonfly in Amber! And that’s what you give to our little hearts? D: The only good part was the one with the pictures.

Claire’s reunion with Fergus was actually better than that!! I have seen one flaw Diana Gabaldon has (of course she couldn’t be perfect, but she’s pretty close) and it’s that she sucks at reunions… because this is not their first reunion, but it’s just as bad as the other ones.

Also, our cute little Jaime has a whorehouse… A whorehouse! Oh dear Lord :’( how didn’t I die while reading this? It just hurts, man! He used to be so sweet in the first book! At least he doesn’t hook up with those girls too. Unlike Fergus, who says he wants to marry a sweet, honorable girl but in the meantime sleeps with all the whores he can.

And there are just so many things now that Claire and Jaime don’t know about each other, and yet, they don’t talk about them. I’d be all "Sit ye down! Sit ye down and let’s talk, for God’s sake!" And I swear, man, I swear, it’s like it’s their fate to be separated every 5 minutes. And it’s also Jaime’s fate to be on the wanted list or close to being killed. He kept himself alive for those 20 years, but now Claire comes back and he’s almost being murdered all the time. How does he do that??

Well, all right. Now let’s just let go of the past and live in the present…

I have one serious question. A really good one… Why is every freaking person they know from Scotland in Jamaica?? I mean, for real. Even Geilies freaking Duncan came back from the dead. And there was this night, when they were looking for young Ian at Geilies’, where everything happened to Claire! She encounters the reverend and finds out that he’s following the Frasers, Mr. Willoughby kills the reverend and also talks about hating Jaime (what?), she’s almost eaten by a crocodile, then taken by slaves, she also sees a ritual with the reverend’s crazy sister, who was then possessed by her daughter from the future… I mean, giiiirrrrl!!!! In just one night! That’s way more than what happens in most people’s lives…

And I must admit that, even though Jaime and Claire go through a lot, I really liked them after all that. They’re clearly very much in love and haven’t loved any other person in those 20 years. And their relationship is really sweet, it reminds me of the first book.  Also, Jamie’s incredibly afraid of losing Claire, now that he knows what it’s like and has been away from her for so long. Adorable.

Then finally… They’re in America!! I definitely want to know what happens next. I’ve seen some people say that they just read the first three books, because it felt ok to leave it there. But noo, I already went through hell these past couple of books! I am not leaving now!!! I also want to see Jaime meet Bree, even if my expectations are low, because I already told you what I think of Gabaldon’s reunions and things like that.

Oh and I’m so sorry this was so long. I actually left a LOT of things out! But it’s just that these books are pretty long.

So… Did I just tell a really long story about how this book broke my heart? Yes.
Did I just give this book 5 stars? Yes.
Oh my God, I’m a masochist. Who knew?