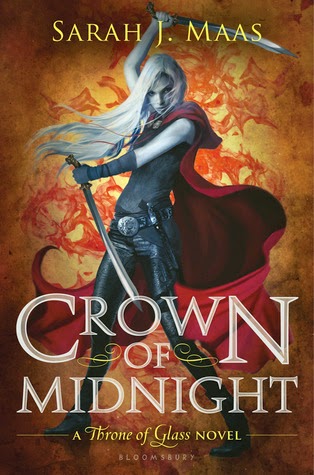 
From the throne of glass rules a king with a fist of iron and a soul as black as pitch. Assassin Celaena Sardothien won a brutal contest to become his Champion. Yet Celaena is far from loyal to the crown. She hides her secret vigilantly; she knows that the man she serves is bent on evil.


Keeping up the deadly charade becomes increasingly difficult when Celaena realizes she is not the only one seeking justice. As she tries to untangle the mysteries buried deep within the glass castle, her closest relationships suffer. It seems no one is above questioning her allegiances—not the Crown Prince Dorian; not Chaol, the Captain of the Guard; not even her best friend, Nehemia, a foreign princess with a rebel heart.

Then one terrible night, the secrets they have all been keeping lead to an unspeakable tragedy. As Celaena's world shatters, she will be forced to give up the very thing most precious to her and decide once and for all where her true loyalties lie...and whom she is ultimately willing to fight for.


If you want to read my review of the first book in the series, you can find it here:

Well, I actually enjoyed this, there were a lot of things going on... Celaena is now the King's Champion, so she needs to kill the people he wants her to, but there's also the whole thing with Queen Elena, Nehemia, the magic, Celaena's past, her romantic life... it really is a lot!

When I started reading I was really glad she was not killing the people, that was nice. But seriously, Dorian and Chaol didn't need to get all surprised she was doing what the King asked of her (even though she wasn't, but they didn't know that). This is Celaena Sardothien, guys! Legendary assassin. And you knew that's what the King's Champion's job was going to be, you wanted her to win the competition. Get over it.

A little change from the first book that I really liked, was that she got together with Chaol, instead of Dorian.

If you've read my review of the previous book, you'll know I didn't want her to be with Dorian. Not one bit. So I was really excited... but then she almost kills him. And they kind of break up... For some reason, I wasn't mad about that, I guess he brought it on himself, right?

Although I have to be fair. Dorian is way better in this book. But hey, he has magical powers now, so that must definitely be why I like him better. And, for some reason, they make it seem like he's the good guy in this book... I'm not going to like Dorian. I won't want him to be with Celaena. I won't.

But enough about the love story, that's not the best part of this...

We also have Princess Nehemia. I didn't really like her in the first book and, actually, I didn't like her in this one either. I don't know why, she always seemed suspicious to me and, in the end, she gave the rebels information about Celaena! Why wasn't she mad about that?! I was mad and she wasn't telling them about me...


Oh and I want to know... Why does Queen Elena have the worst timing ever? I was already mad because she didn't warn Celaena about being poisoned in the first book before the final fight. And we find out so many things about Erilea after that... Why wasn't she there when Erilea needed her most? I bet the girl is just pissed they don't tell her story right and say she was just some damsel in distress.

And I guess she's Celaena's ancestor? Because I knew, I kneew it!! She's actually Fae! And she's Aelin! God, it was so good when Chaol found out about that... I just want her to get all her power back and bring the stupid King down and make him pay.

I loved that there was more action in this book. They show us when she tried to 'escape' from Endovier, when she's killing Nehemia's murderer and when she goes to save Chaol. Oh and there's also the part when she goes through all those doors and finds that weird creature... I wonder what that was, I want to know more about that. And there's also the thing with Archer. He really surprised me! I thought he was just some weakling and then did all those things! Wow! I'm really glad she ended up killing the guy, he was crazy!

And there's not just a lot of action, but magic too! The part with the portal was really good, although it was very dangerous, and I was so very sad that thing took Fleetfoot with it! Why the dog?! I ask you, why?? Thank God she's safe now...

Now Celaena is going to Wendlyn (thank you Chaol -_-) and I wonder what's going to happen there. Although I must admit that I don't know when I'm going to be reading the next book. I really enjoyed this book and the previous one, but it didn't keep me hooked for a reason, I still don't know if I'll keep reading the series. However, I'd still recommend it, it has a little bit of everything and it's very entertaining.