The Iron Queen (The Iron Fey #3) by Julie Kagawa + Extra


Well, I have to say I’ve been really loving this series. I’ll admit that it took me longer to read this third book than the other two, but when things started getting interesting I just couldn’t put it down.

I must say the first half of this book had me a little bit confused; there were times when I was all ‘Well, you’re just getting 3 stars, not 5 like the previous two’, but then something really amazing happened and I was ‘Well all right, you now get 4 stars’ and, finally, it’s like there was some kind of explosion of awesomeness and I found myself screaming ‘Oh nooo, forget everything I said!!! You just got yourself those 5 stars alright!!’… I did like that ending.

Sooo remember me criticizing Ash about not letting go of freaking Ariella (and comparing Meghan to her)?? Well, GUESS WHO HASN’T CHANGED! An example: ‘You’ve grown…changed. You’re stronger now, like she was.’ (to Meghan). Seriously Ash...

But really, he can also be such a drama queen, whatever Meghan says hurts him and he just feels so insulted he has the need to go away and disappear. Like when she said she didn’t always need him to protect her, BECAUSE HE TRAINED HER. HIM. Because that’s so insulting Ash, isn’t it??

This book also made me see Ash in a different light. When he tells the story about what he did to that human girl years and years ago and not even feeling guilty about it, that he just understood a little bit better what it could’ve been like when he went through the whole thing with Ariella… It’s sad. I know he doesn’t even have a soul after all, and he’s also a Winter fey…but I don’t know, I still found this to be a little bit too much and very immature.

When he appeared I got really excited, but I still couldn’t believe how stupid he was. Meghan chose Ash over him, after all. Even though he actually asked her to stay with him. But no, he went and got his ass exiled too. For her… But yeah, people in love do stupid things… Kind of adorable, actually.

And then, even though he did all this so he could be with Meghan again and help her fight the Iron King, some things he did in the past came to light… Like him knowing about Meghan’s actual dad… Ouch… I think that Puck takes really bad decisions when it comes to sharing information. For example:


He should start saying things to people, really. He shouldn’t complain later when they find out and there’s nothing he can do to fix it.

Now, about the Iron King… I knew it!!!! I knew all along who he was!! I was so happy, I felt so proud and smart :’)… Well, maybe it wasn’t that hard to figure out, but after not been able to know who the Iron King was in the first book, I liked knowing it this time :)… And apparently Machina was kind of nice in this book, go figure. Although there’s something I really didn’t understand… Did Meghan really have to sacrifice herself? Couldn’t she just hurt this Iron King with her glamour instead of waiting for him to come at her and almost kill her? Someone please explain.

I have to say that I liked Meghan a lot in this third book, she’s obviously matured and she’s a lot stronger now; she can take care of herself. She stood up to Leanansidhe, Oberon and Mab; pretty much everyone, actually. Like she was supposed to! Everyone was always treating her like crap and she was actually the only one who could save them, way to be thankful, people! But really, she feels like she’s always the one who has to go straight to fight the problem, when she doesn’t even need to. Just sit down for five minutes, girl!! SIT DOWN! I don’t know why she feels bad about all those fey dying; they all want to kill her anyway.

I also got VERY excited when she said: ‘My name is Meghan Chase, and I am the Iron Queen.’ That was just too good.

And now, a little bit more complaining about Ash (it’s just what I do). At the end he says something that annoyed me a little: ‘We were from different worlds, now.’ Like really, because you weren’t before? It wasn’t a problem or anything, right? What with being exiled and all for being in a relationship with a rival. I know iron can kill him, but still, I don’t see why they’re saying this now, it’s been like this all along... At least he wants to get her back. You go get her, man, you go get her AND MAKE HER HAPPY OR I’LL KICK YOU, you’ve been making me angry these past two books.

I really love Ash and Puck though, even if I just can’t stand Ash sometimes, I actually think he’s good for Meghan and they’re cute together. I guess it’s not just humans who aren’t perfect… And I also liked him spending time with Puck at the end, I actually thought that if there was a book about these too having adventures together, I’d read that. And then I started reading Summer's Crossing and The Iron Knight :3… where there’s a lot of that!! :D I can’t express my excitement at that moment.

EXTRA:
There’s also a short story and a letter between this book and the next:

Summer’s Crossing (The Iron Fey #3.5):
Like I said, this is a story about the two boys. Ash has some business to take care of and the sweet, sweet Puck just tags along… Ash can complain about it all he wants, but without Puck he would never have gotten that far. 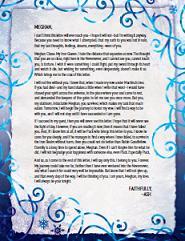 Ash’s Letter to Meghan (The Iron Fey #3.6):
Hmm there’s not much to say about this one. It’s a letter Ash writes to Meghan, but just in case he never gets to be with her again (aka he dies).

So, like I just told you, I’ve already started the fourth and last book in the series, I think it’s a little bit longer than the first three. For now there’s been a lot of Ash, Puck and Grimalkin… It’s just too good :)