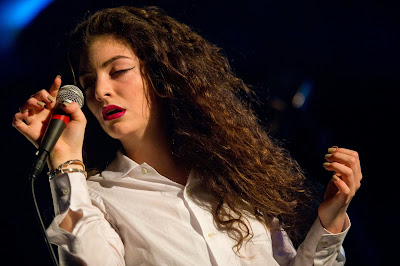 
I’m pretty sure you may have heard of Lorde or at least got to listen to her song Royals somewhere.

Something I really like about her is that she is very unique, nowadays it’s like all celebrities are coming out of the same factory, so to speak. And have you seen her perform? She’s crazy, I love it.

Almost every song out there is about love and relationships, so I really appreciate it when someone sings about their actual feelings about life and everything that happens to them. Some of my favorite songs by Lorde include Team, The Love Club and A World Alone.

I also love the fact that she doesn’t go around taking off her clothes to get more fans, it’s not necessary when you do have talent and it shows girls that they should learn to respect their bodies.

I’m really grateful that she got the chance to share her music, because I think it’s something that was needed. I don’t know about you but I feel really identified when I listen to her songs, I usually feel left out and like I don’t belong, so knowing that there are other people like that out there and putting it so beautifully into words like Lorde does, is really comforting.

I thought I might talk about some of her songs, sharing a little bit of my interpretation of them, since most of her songs can be really difficult to understand and there’s more than one meaning people see in them. I’ll also be sharing some of my favorite parts of the lyrics:

Team
Team may be my favorite song from the album; this one is a little bit easier to understand than some of the others. I think it’s about feeling out of place in this world, but it’s still ok since there are others like you out there, and it’s also ok to be this way and you should embrace it. You shouldn’t care about what society wants you to believe is right and normal. How is this not awesome?!

Living in ruins of the palace within my dreams

Glory and Gore
This one is really great too, but I feel like its meaning is a little harder to tell. It’s like she’s talking about how people enjoy violence nowadays and can’t get enough of it.

White Teeth Teens
A song that’s also a little bit harder to understand, it’s like she’s saying how this new generation really is, striving for perfection, or at least make it seem like they are perfect, it’s all about appearances and getting attention. She also says how she tried to be a part of it but really couldn’t.

I am not a white teeth teen
I tried to join but never did
The way they are, the way they seem is something else, it's in the blood

Still Sane
She mentions how she’s going to try to stay being good and work to achieve what she wants. I’ve found some people saying it has to do with The Shining, which I find to be very interesting.

The Love Club
This song is definitely one of my favorites, it’s really amazing. I think it’s about the moment when you start getting into things like dating and hanging out more with other people thinking it’s going to be wonderful, how you really want to fit in and be a part of something and be loved, but then you just get hurt and want to find a way to get out of it and be by yourself once again.

Ribs
This song is about how scary it is to grow old and I really love it, because it’s a feeling I get constantly, the older you get the more responsibilities and difficult challenges there are.

A World Alone
I believe this one is about being surrounded by fake friends and their meaningless chatter, feeling very different from all the others, but still having a special person who stands by you and understands you.

Buzzcut Season
The meaning of this one’s a bit hard to tell, I think there are different ways to interpret what she was trying to say here, but I think it has to do with escaping reality and pretending to be in a world where everything is ok.

Explosions on TV and all the girls with heads inside a dream
So now we live beside the pool, where everything is good

Royals
I think everybody knows what this song is about, she’s saying how materialistic and shallow the show business has become (what society has become and what it expects from you) and what people in it are sharing to the world, and also how she doesn’t want to be a part of it.

Do you also like Lorde and/or her music? Have you listened to any songs that are similar to hers?

Email ThisBlogThis!Share to TwitterShare to FacebookShare to Pinterest
Labels: music