The Mad Countess by Erica Monroe 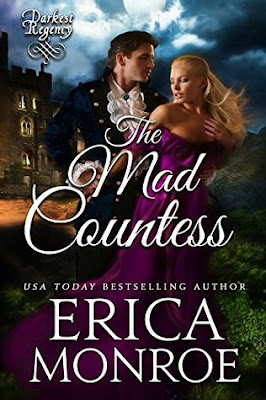 
When two best friends become lovers, their scandalous path to happily ever after is fraught with danger in this emotional, Gothic novella from USA Today Bestselling Author Erica Monroe.

Theodore Lockwood, Earl of Ashbrooke, has been in love with his best friend, Lady Claire Deering, for as long as he can remember. Claire too harbors a secret desire for him--but a witch cursed her family with madness, and she's terrified she'll only hurt him if they act on their feelings. When a will reading at a mysterious castle in Cornwall brings them both together on All Hallows Eve, they'll work to break her family's curse...and find true love.


I already read a book by this author, I Spy a Duke, and really enjoyed it, so I had high hopes for this.

I'm glad to say that this was a great read! Although I didn't know this was a novella until I opened the book and it was mentioned there, which actually made me kind of sad, since I was very excited and wanted to spend a lot of time reading this story! But I still enjoyed it a lot and was very happy by the time I was done reading. It didn't feel rushed or forced, the pace was just right and it didn't leave me feeling like something wasn't explained or told.

So Teddy and Claire have always been best friends and, as they grew up, they started having feelings for each other, but none of them told the other. Claire didn't think it'd be fair to tell Teddy, since she was cursed to become mad in the future, just like her mom and aunt, and she just couldn't hurt him like that. Teddy, on the other hand, didn't believe in the curse, but was afraid that Claire wouldn't want him and that he'd lose his best friend for ever, at least by keeping quite he would be able to stay by her side.

Both main characters were great, I especially liked Teddy, it was such a joy to read a book with a hero I liked, God knows I've been having such a hard time liking heroes in my books lately.

Teddy is very rational and precise, he has many fears he's trying to get over and wants Claire to stop believing in that curse, because, according to him, if you can't see it or explain it in any way, then it's not possible or real. He's pretty adorable actually, and thank goodness he's nothing like his brother.

And Claire is such a sweet girl, I felt so bad for her, it must be exhausting having to worry every day that you might not have a future, and that you might start going crazy when you least expect it. That's no life.

I think I can easily say that this is one of the cutest couples that ever lived. They're so very adorable it hurts, and I can't believe Teddy never realized Claire had feelings for him, she did suspect Teddy wanted to be with her, but she wouldn't allow it because of the curse, because she thought he deserved happiness, and not a potentially crazy wife. Not what her mother became.

And can we appreciate how he's 25 and hasn't even had his first kiss yet, because he only wants to be with Claire? It was so common for men back then to frequent brothels and keep mistresses, and he didn't do any of that, he was waiting for Claire. Although let's be honest here, he's the only one to blame for it taking so long. Seven seasons, Teddy?? Really?!

Anyway, this is a man to be admired, that is serious commitment there. Some other man might not have done that.

And not only that, but he was also ahead of his time.


"He did not understand society's fascination with the virginal states of women - it was a double standard he found distinctly illogical, for men were allowed to cavort with as many women as they wanted, whenever they wanted."

He also even considers servants his equals, because he says we're all human beings and titles and money shouldn't make a difference.

And I was very surprised to see how much I liked this couple, since I'm not a big fan of stories where childhood friends become lovers, I don't know, I'm one for first meetings and such. I like seeing the exact moment someone falls in love with another character.

I still wonder why the witch had to curse her sisters because her father wouldn't take care of her. Really? They did nothing wrong, get back at him, not his innocent daughters, who could've easily been you. Ridiculous woman.

I was glad they found a way to fix everything, and that Claire finally felt comfortable, well, living life!

If you're a fan of historical romances and nice guys, then I really recommend this :)

Thank you for reading! ♥
Posted by Carla @ Lipstick and Mocha at 6:33 PM