To Win a Viscount by Frances Fowlkes 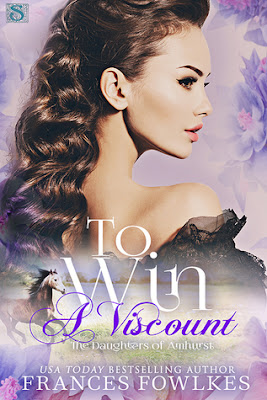 
England, 1820. To gain a certain marquess’s notice, Lady Albina Beauchamp aims to win the derby. What she hadn’t planned for is the price handsome Mr. Edmund White asks in payment to train her to race: each lesson for a kiss.

A first place finish isn't the only thing worth racing for.

Lady Albina Beauchamp is in love with the Marquess of Satterfield. Unfortunately, his only interest is in horses, and doesn’t know she exists. But when the marquess confesses he will bestow his undying admiration on the jockey racing the winning horse at Emberton Derby, Albina sets out to win his affections by training to race.

Mr. Edmund White is a master groomsmen for the Earl of Amhurst in line for a viscountcy, should he abandon his passion for horses and become a respectable sheep owner. But horses are his love--until he meets Lady Albina and her silly notions of racing. When she affirms she will enter the derby with or without his assistance, Edmund not only instructs his student in racing, but seduction as well.

For Albina, a first place finish isn’t the only thing at stake. She must decide whether to take her place in society...or follow her heart and love a groom.

**I received a free copy in exchange for an honest review**


About a year ago I read the first book in this series, and I loved it! I found it so sweet and beautiful, Henrietta and the Earl were a great couple, reading about their imperfections and flaws, and how much they cared about each other was very enjoyable. So when I had the chance to read the sequel, following the story of one of Henrietta's sisters, I thought I might also enjoy it. But boy, was I wrong.

I think the main reason is that I really loved the Earl and Henrietta in the last book, I loved how broken they were (and let's be honest, I also loved the whole Beauty and the Beast vibe that was going on there, I'm a big fan of those). But there wasn't a single moment while reading To Win a Viscount when I actually liked the hero. In fact, I couldn't even stand the guy.

In the first few chapters Edmund thinks so often about how he's bedded so many woman, how he had uncontrollable urges when he was younger and what not. Relax boy, I don't need to know all that, or that you can't seem to keep it in your pants.

The Earl was much more sweet and less creepy than Edmund, what he thought most about was how hunted he was by his past and a former love of his, and also about the scar that covered half of his face and the pain that came with it. Edmund just seems to be thinking about women and sex.

I loved to see how the Earl, who was Albina's protector, and the Duke (and owner of the derby) wanted Albina to race, while Edmund just kept shouting in his head "BUT SHE'S A WOMAN!!". Oh-My-God, Edmund, yes, she's a woman, we know already, you made that clear, and thanks to you I'll never forget that Lady Albina Beauchamp is a woman. Thank you.

If her protector and the owner of the derby are fine with Albina's wish, then just let it be! You're in no position to tell any of them what to do. And by the way, I was actually very surprised to see how freely he addressed them, no groom in his serious mind would do that.

And even though he mentions so often that she's a woman and, on top of that, a lady, he doesn't seem to have any problems taking so many liberties with her. Sure, Mr. White, less than seven seconds of riding is definitely a day's lesson, surely you deserve "your payment", that kiss you asked from her when you told her you'd be training her for the derby... But oh no, please, just suit yourself and try to get more than a kiss while you're at it, even though it wasn't part of the deal and even though you're getting something out of it from the Earl: actual payment.

He is so disrespectful that he even starts questioning Albina like crazy, like he has the right to know whatever he wants, but the moment she asks a simple question, he estates that they're not equals and what not, and that he shouldn't be telling her anything...

I really tried reading this, I almost put it down more than once before I finally did, but decided against it and gave it another chance every time, especially because I liked the first book so much, but I just couldn't like Edmund, I couldn't.

I'm sorry if this was just me ranting about how much I dislike Edmund White, but he was, after all, the reason I wasn't enjoying the story.


Have you ever had this happen to you? Loving a book in a series and then not liking the sequel?