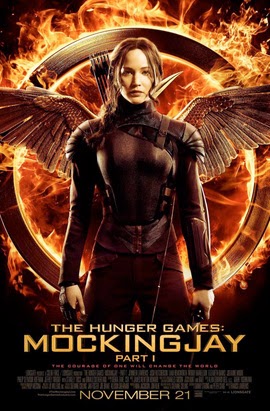 I must admit that I wasn’t really looking forward to this movie a few months ago, until the trailer came out… Because wow, that trailer was awesome!

I read The Hunger Games trilogy some years ago and, even though I loved the first two books, I wasn’t a big fan of Mockingjay. It’s not that I didn’t like it, I did enjoy the first part of the book (maybe the first half or first two thirds? I don’t really remember), because… well, there are some things that happen there that I didn’t love and didn’t find necessary, but I won’t be spoiling it for you.


Even though I did enjoy the first part of the book, I didn’t love it. Katniss was going through a lot, I know, but I didn’t really like how she dealt with the situation, it didn’t feel like her. And the whole idea of the propos was weird to me. But the movie improved that. A lot.

Let’s just start by saying that these movies have some really great actors. Seriously, they’re amazing. Pretty much everyone who works in these movies is awesome, not just the actors though, because everything about them is just too good. The costumes, the scenery, the special effects, the dialogue… they’re all great!

I can’t tell you how much I loved Effie in this, she made me laugh SO much, she’s hilarious! And her clothes and her style, now that she’s in District 13… she made it work! Haha :D And I also loved Cressida; Natalie Dormer and her lopsided mouth, that I adore, just made her better!

Also, in the book, Finnick is a very important character and, even though we see a lot of him in the movie, I feel like it wasn’t enough. But hey, it was tough fitting all that story into just two movies, so I guess I can live with that, he did get his on-screen moments.

Oh and the way they made Coin’s hair was awesome, I loved it!! She looked so much better than how I imagined her :3

And, needless to say, Katniss’ outfit was BREATHTAKING. I remember when I saw it on the poster I was all ‘OMG, you go, Cinna!’. So much better than those grey overalls, ugh. I feel ya, Effie, I feel ya.

Well, I’ll stop talking about the characters and get more into the movie now, sorry for that haha.
Just to warn you, if you haven’t read the book or watched the movie, there might be some mild spoilers ahead.

So, the most important part of the story is, of course, the districts’ uprising. And that was amazing. I remember that when I read the book, I had some ideas in my mind of how it could’ve been like, but they really took it to another level here, it was precious! When the people from District 7 run to the woods and start climbing the trees and yell at the Peacemakers that if they burn, they’ll burn with them… wow ♥. And there was also the part with the dam, when the people start running to it and set off the explosives… I died. I was so happy.

And like I said, they did an amazing job with the propos too. I didn’t really like the idea when I was reading it, but this movie made it so much better for me (I love how bad Katniss is at acting, by the way). I also love that they included that hanging tree song and how they put it together with the images of the uprisings and District 12 and aaaaaah!!! So beautiful! So, so beautiful! And you can bet whatever you want that I won’t be getting that song out of my head any time soon!

The parts with Peeta appearing in the videos from the Capitol were great too, especially since they actually made him look worse and worse every time. I was looking forward to seeing Johanna but she was barely there, I think we actually saw her more in the teaser trailers haha.

And, finally, that part when Peeta attacks Katniss at the end… that was so good!! I actually thought he was going to kill her, oh God. Poor Katniss, she just can’t get a break.


Are you, Are you
Coming to the tree
Where they strung up a man they say murdered three

Have you read Mockingjay? Did you watch the movie? What did you think of it?