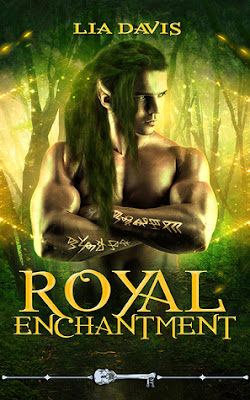 Ava Green has made a name for herself in the real estate world by reconditioning old, historical homes with her partner and friend Jeff. But her newest project, a three-story Victorian in the foothills of the Blue Ridge Mountains, promises to be her biggest moneymaker yet. And one she’s undertaking on her own. During her first walk-through of the house, however, she discovers a locked door, and a skeleton key that seems to appear out of nowhere. Unlocking the door, she is transported to a mystical world of fae and mythickal creatures and meets the King of the Morna. The sovereign of the Dark Elves.

King Finn Sylcan has searched for the one who can bring the magick back to his world, Edra, for eons. An old prophecy told of a female of both Dark and Light elven descent, a hybrid both Calim and Morna. It is said she is the only one who can repair the damage the war between the Dark and Light kingdoms caused. But after searching for so long, Finn never dreamed that she’d just show up outside his palace walls. Or that she’d be his mate.

**I received a free eARC from the publisher via NetGalley in exchange for an honest review**
This is the kind of book I usually enjoy. I just love fantasy, fae, romance... Pretty much everything that is said to be found in this.

Now, don't get me wrong. Royal Enchantment does include all of that, but turns out that this is a novella and, to me, everything felt rushed. There was just so much content and information to be shared, but not enough pages for the whole story to be told. I think that, had this been a full book instead of a novella, I might have enjoyed it a lot.

The plot is very interesting, we have this whole new realm that's connected to the human world, and there are many different creatures to be found. There are also two kinds of elves, the Calim and the Morna (who are not exactly the best of friends), and our heroine is a hybrid between the two, the one people have heard of from the prophecy, a young woman who is supposed to bring back the "magick" to Edra.

The romance seemed very sweet, but, again, very rushed. Finn and Ava have just met, they're mates, and they need time to get to know each other while also trying to bring back the "magick". I just didn't get enough time to believe they were really in love.

I think this had a lot of potential, but it was too short for me to appreciate it all.


Have you read Royal Enchantment? What did you think of it?

Thank you for reading! ♥
Posted by Carla @ Lipstick and Mocha at 2:02 AM